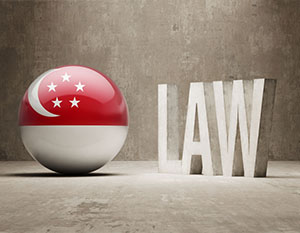 Singapore is a trade-oriented market economy, though, it lacks in natural resources. Its geographical location allows it to function as an entrepot, bridging the west and the east. It relies on purchasing raw materials and refining it into finished products to export.

The port of Singapore, on the basis of the cargo tonnage it handles, is the 3rd busiest port in the world. Obstruction of the marine lanes or its import and export related activities can be detrimental to the economic well-being of this island nation.

On 31 August 2015, Singapore’s Ministry of Law signed a Joint Declaration with the International Tribunal for the Law of the Sea (ITLOS). Under the terms of the declaration, Singapore can now act as a viable hearing venue for the law of the sea litigation matters.

Now, Singapore can provide appropriate facilities to host the special chamber of the tribunal or the tribunal. However, this does not establish Singapore as the legal forum for the settlement of law and sea litigation. Still, it is a great step forward for the country, as it facilitates to put in place the legal framework that the maritime companies can use to resolve their disputes.

It is a great news for the Asian maritime industry. The local and foreign maritime operators will see a significant cost reduction in the dispute resolutions. It will make Singapore a destination of choice for arbitration. It will also add another brick in its efforts to build an internationally acclaimed dispute resolution network covering a wide range of legal matters.

The Function of International Tribunal for the Law of the Sea

ITLOS has the competence to act as a court to see to it that the seas are used according to the rule of the law.

It is an independent judicial body formed as per the conventions (1982) of United Nations on the Law of the Sea (UNCLOS). Singapore is one of the parties to the convention, in addition to another 165 states and the European Union.

The Disputes ITLOS can Handle

ITLOS interprets and applies the UNCLOS during the course of resolution of disputes. It acts as an arbitrator between the users, the coastal and port States and the International Seabed Authority to help resolve the disputes that may arise over various forms of the exploitation of sea. Such incidences may arise over the activities like;

The Need of ITLOS in South-East Asia

ITLOS can also arbitrate over boundary problems between the states. And there are a few hot potatoes to cool in the South China Sea. China’s claims over the South China Sea are in conflict with those of Vietnam, the Philippines, Malaysia, Taiwan and Brunei. The region also facilitates the movement of USD5 trillion worth of ship-borne goods.

What are the Intentions of Singapore

After the signing of the Joint Declaration, the Law and Foreign Affairs Minister K. Shanmugam welcomed the new development by commenting, “The Joint Declaration is a clear endorsement of Singapore as a neutral venue for the effective settlement of international disputes.”

He also extended the comment with, “It also demonstrates Singapore’s commitment to the international rule of law by facilitating access to ITLOS, in order to serve the needs of the states of this (south-east Asian) region, with a view to promoting the peaceful settlement of disputes relating to the law of the sea,” he added.

The signing of the joint declaration to invite an internationally accepted arbitrator before the visit of Chinese President Xi Jinping is a smart move by the Singaporeans. They are also under pressure because of the South China Sea dispute. The peaceful resolution of the dispute will also keep the trade lanes open for Singapore. It is their message to the warring parties.

On Nov 7, 2015, Chinese President Xi Jinping, during his 2-day visit to Singapore, said, “The South China Sea islands have been Chinese territory since ancient times. It is our duty to uphold sovereignty.” He also added that “China has always insisted that the dispute in the South China Sea be resolved peacefully through talks.”

Mr Xi also emphasised that “we value harmony, diversity and good neighbours,” and “We have a responsibility to ensure peace, stability in this neighbourhood.”

Well, the time will reveal the form and the scale of cost the Chinese neighbours will have to pay if they keep on pushing their claims. It will also reveal, if ITLOS, which is now right on the war-front, can resolve the South China Sea dispute peacefully. So, SBS Consulting, one of the leading Singapore company incorporation services, advises investors to, “Wait and Watch.

Today, South China Sea is a troubled water. Singaporeans have, in their own way, shown their good faith and peaceful intentions by pouring oil on it. They are neither playing the part of a Rich Brother nor that of a Small Brother.

Well done Singaporeans, that is a lot of crafty footwork on your part!